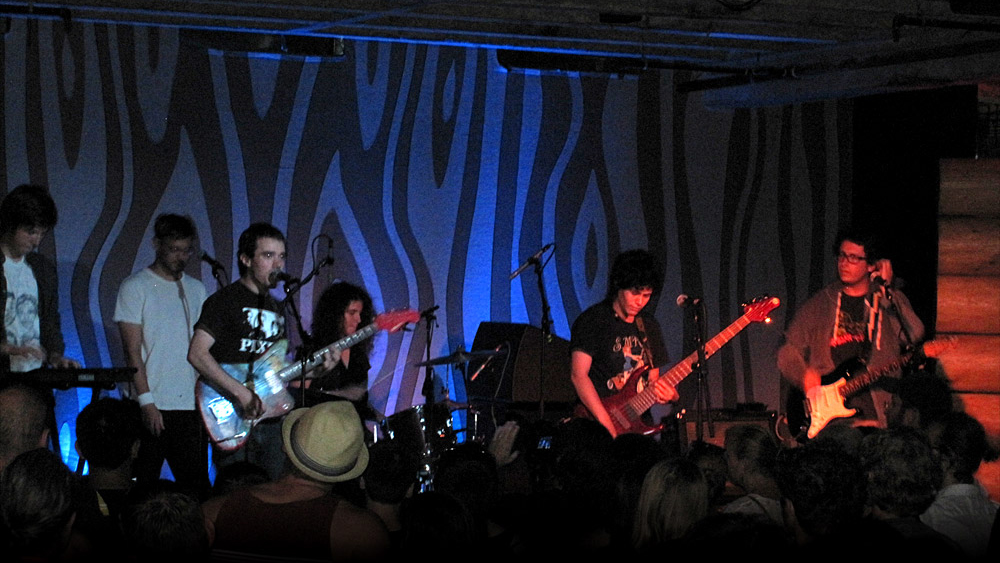 The daytime MusicFest NW shows broadcast live on KEXP have been great so far, and since I had my kids with me and the shows are all ages, I decided to bring ’em along. My son’s opening soccer game took precedence in the afternoon, so unfortunately we missed the Antlers noon-time set. Avi Buffalo was playing next, so after some cajoling, arm twisting and watching a couple of videos of the band, we hit the Doug Fir. I have to admit it was kind of fun showing the kids around the venue that I normally only visit late at night. We got some ice waters and settled into the lounge in back for the 30 minute set.

Avi Buffalo as a band are young, and really just kids themselves, but the songs written by Avi Zahner-Isenberg (many recorded in his home studio) have  traces and seedlings of many older artists carried within – musicians like Neil Young, Joni Mitchell and even the Pixies (Avi was wearing a Pixies t-shirt). The “pop” songs were all very pleasant and sometimes more complex as both time and chord changes borrowed from jazz crept into the mix, especially on their final song.

All in all, the kids liked the show – my son even a little more than my daughter. I think she saw through my clumsy attempts at getting her to start music lessons again by pointing out the cool drummer and bassist, both girls. Not the kids first concert (that was X/Knitters when they were just wee-nippers) but a fun afternoon of music. Afterwards we walked across the driveway to the MFNW Poster Show where poster artists from all over were selling limited edition concert posters – groovy stuff, though some might have been rated PG-13.

Avi Buffalo’s debut, self-titled  album is out now on SubPop.